Tagline: They say that behind every great man there's a woman. But in this case it's ridiculous.

Plot: Just before stubborn millionaire Edwina Cutwater dies, she asks her uptight lawyer, Roger Cobb to amend her will so that her soul will pass to the young, vibrant Terry Hoskins – but the spiritual transference goes awry. Edwina enters Roger's body instead, forcing him to battle Edwina for control of his own being. 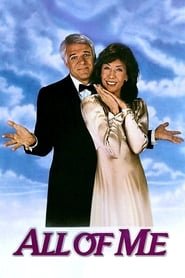