Tagline: History is about to be rewritten by two guys who can't spell.

Plot: Bill and Ted are high school buddies starting a band. They are also about to fail their history class—which means Ted would be sent to military school—but receive help from Rufus, a traveller from a future where their band is the foundation for a perfect society. With the use of Rufus' time machine, Bill and Ted travel to various points in history, returning with important figures to help them complete their final history presentation. 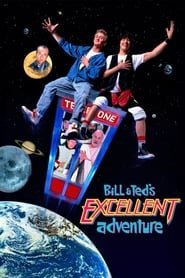 The Legend of Billie Jean (1985)
Tagline: When you're seventeen, people think they can do anything to you. Billie Jean is about to prove them wrong.
Genre: Action, Drama
Runtime: 96
Release: 1985-07-19

Remo Williams: The Adventure Begins (1985)
Tagline: A hero who doesn't exist must save America from an enemy we never knew we had.
Genre: Comedy, Action, Adventure, Thriller
Runtime: 121
Release: 1985-10-11