Tagline: Valerie's about to discover how far a girl has to go to find Mr. Right.

Plot: In this musical comedy, Valerie is dealing with her philandering fiancé, Ted, when she finds that a trio of aliens have crashed their spaceship into her swimming pool. Once the furry beings are shaved at her girlfriend's salon, the women discover three handsome men underneath. After absorbing the native culture via television, the spacemen are ready to hit the dating scene in 1980s Los Angeles. 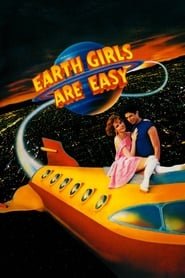