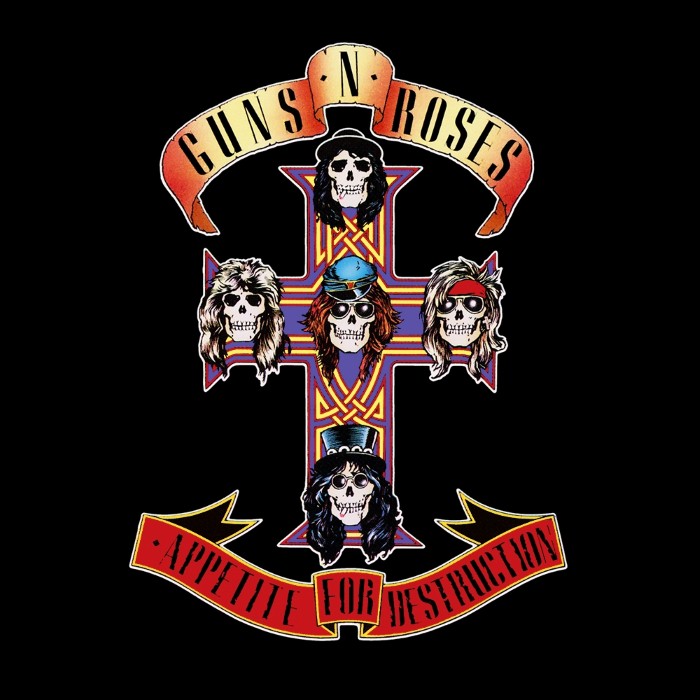 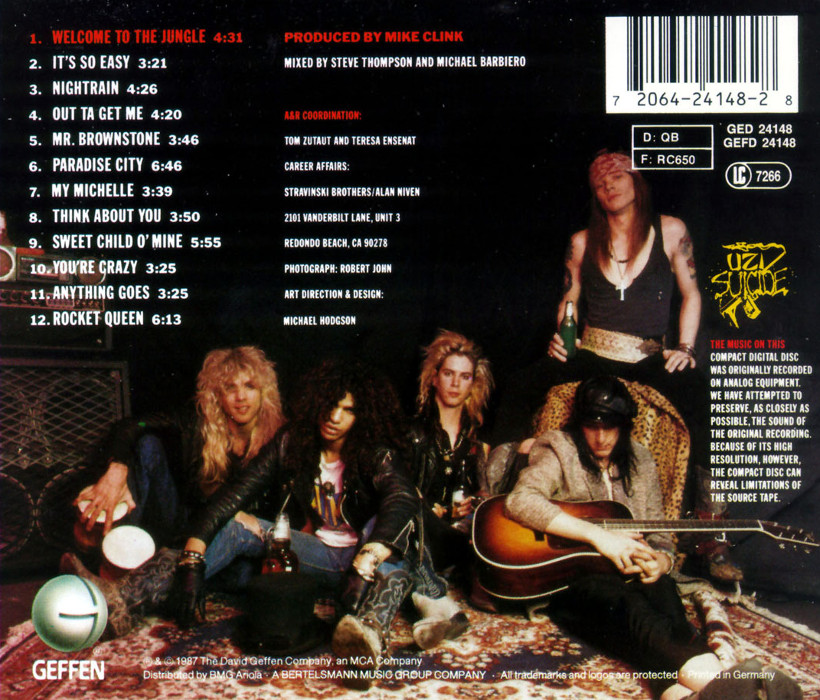 Overview:
Appetite for Destruction is the debut studio album by American hard rock band Guns N' Roses, released on July 21, 1987 on Geffen Records. It was well received by critics and topped the American Billboard 200 chart. As of September 2008, the album has been certified 18 times Platinum by the RIAA. The album is featured in the book 1001 Albums You Must Hear Before You Die,.

Axl Rose stated that many of the songs featured on the album had been written while the band had been performing on the Los Angeles club circuit, and a number of songs that would be featured on later Guns N' Roses albums were considered for Appetite for Destruction, such as "Back Off Bitch", "You Could Be Mine", "November Rain" and "Don't Cry". It is said that the reason for not putting "November Rain" on it was because they had already agreed to put "Sweet Child 'O Mine" on it and thus already had a ballad on the album (however, both Use Your Illusion albums would contain more than one ballad).

The band started searching for someone to produce their debut, mostly recommendations made by Geffen executives Alan Niven and Tom Zutaut. Demos were recorded under both Manny Charlton and Spencer Proffer, with some work made with the latter being issued in the EP Live ?!*@ Like a Suicide. One of the interviewed prospects was Kiss's Paul Stanley, rejected after insisting on changes to Steven Adler's drum setup and the songs. The band considered Robert John "Mutt" Lange, but he proved too expensive to hire. Eventually Mike Clink, who had produced several Triumph records, was chosen, for being the first to record the band exactly the way they wanted.

After some weeks of rehearsal, the band entered Daryl Dragon's Rumbo Recorders in January 1987. Two weeks were spent laying down basic tracks, with Clink splicing together the best takes with his razor blade. Clink worked eighteen-hour days for the next month, with Slash overdubbing in the afternoon and evening, and Rose cutting vocals until the sun came up. Slash struggled to find a guitar sound before coming up with a Gibson Les Paul copy plugged into a Marshall amplifier. He spent hours with Clink paring down and structuring his solos. The total budget for the album was about $370,000. According to drummer Steven Adler, the percussion was done in just six days, but Rose's vocals took much longer as he insisted on doing them one line at a time, in a perfectionism that drove the rest of the band away from the studio as he worked.

Many of the songs on Appetite For Destruction began as solo tracks that individual band members wrote separate from the band, only to be completed later. These songs include "It's So Easy" (Duff McKagan) and "Think About You" (Izzy Stradlin). "Rocket Queen" was an unfinished Slash/McKagan/Adler song that was written from their earlier band Road Crew, whereas "Anything Goes", written by Hollywood Rose and included in their compilation album The Roots of Guns N' Roses, was later re-written for Appetite.

Most of the songs on the album reflect the band's personal experiences and daily life, such as "Welcome to the Jungle", some of the lyrics of which Rose wrote after he encountered a man near the highways of Manhattan in 1980 shortly after arriving there from Indiana, and "Mr. Brownstone", which is about the band's problems with heroin. Lyrics to some of the songs focus on the band members' younger years, like "Out ta Get Me", which focuses on lead singer Axl Rose's constant trouble with the law as a youth in Indiana. The band also based song lyrics on some of their female friends, reflected in the songs "Sweet Child o' Mine", "My Michelle", "You're Crazy", and "Rocket Queen".
Share:
Facebook Twitter Reddit Pinterest Tumblr WhatsApp Email Share Link
Top