John Lennon, formerly of the Beatles, was shot dead in New York City on 8 December 1980. He was killed by Mark David Chapman, an American Beatles fan who had travelled from Hawaii.

As Lennon walked into the archway of his apartment at The Dakota, Chapman fired five shots at Lennon from a few yards away with a Charter Arms Undercover .38 Special revolver. Lennon was hit four times from the back. Chapman remained at the scene reading J. D. Salinger's novel The Catcher in the Rye until he was arrested by police. He planned to cite the novel as his manifesto.

Chapman said he was angered by Lennon’s lifestyle and public statements, especially his much-publicized remark about the Beatles being more popular than Jesus.

Chapman pleaded guilty to murdering Lennon and was given a sentence of 20-years-to-life imprisonment in an Upstate New York prison. He has been denied parole 11 times since becoming eligible in 2000. 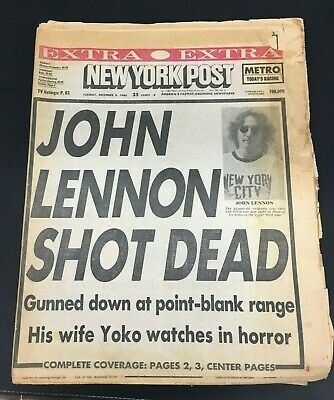