Tagline: An action packed adventure, full of laughs and heroics.

Plot: Ever in search of adventure, explorer Allan Quatermain agrees to join the beautiful Jesse Huston on a mission to locate her archaeologist father, who has been abducted for his knowledge of the legendary mines of King Solomon. As the kidnappers, led by sinister German military officer Bockner, journey into the wilds of Africa, Allan and Jesse track the party and must contend with fierce natives and dangerous creatures, among other perils. 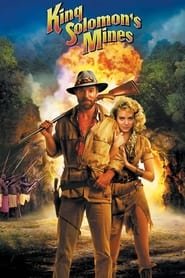