Overview: Michael Long, an undercover police officer, is shot while investigating a case and left for dead by his assailants. He is rescued by Wilton Knight, a wealthy, dying millionaire and inventor who arranges life-saving surgery, including a new face and a new identity--that of Michael Knight. Michael is then given a special computerized and indestructible car called the Knight Industries Two Thousand (nicknamed KITT), and a mission: apprehend criminals who are beyond the reach of the law. The series depicts Michael's exploits as he and KITT battle the forces of evil on behalf of the Foundation for Law and Government.

Set in the year 2000, handguns are outlawed in favor of sonic weapons and criminals are placed in suspension instead of jail. When a violent crime takes place the "Knight 4000" from the Knight Foundation / FLAG may be the only solution.

This one-off features the original series cast members but is mostly forgotten about because KITT is reborn as a shiny red Camaro with a body kit that looks more like a GM prototype car than anything you'd see on the street. And that's because it was based on the Pontiac Banshee show car and recreated for the show.

The was meant to be a reboot of the series but because of David Hasselhoff's commitment to Baywatch that was still on the air at the time, he could not commit to a new series. A series of made-for-TV movies was proposed instead but Universal and NBC could not come to an agreement so in the end only one movie was made.

Be on the lookout for James Doohan, Scotty from Star Trek, making a cameo appearance.

Between the 'new' KITT and the sci-fi'ish premise of the year 2000, this one has been forgotten about by many fans. If you have Netflix, here's a chance to watch a weird little footnote in the Knight Rider history. 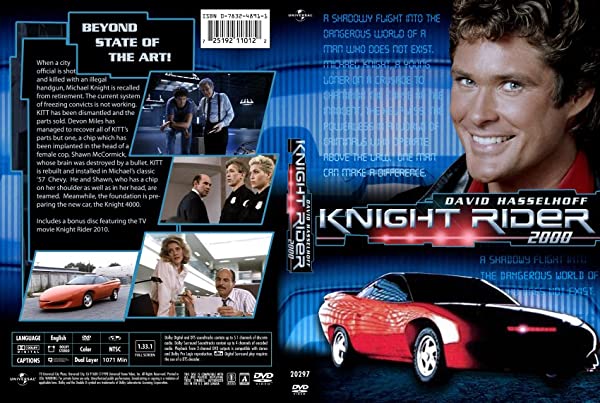