Tagline: You have the right to remain silent. Forever.

Plot: In New York, people are slain and strangled to death brutally on the open street. All witnesses agree that the murderer was in a cop's uniform. Soon the police search and find a suspect in its own ranks: Jack Forrest, suspected of murdering his own wife and the rest of the unfortunate individuals to die by the Maniac Cop’s reign of terror. To prove his innocence, he investigates the case with his partner, Theresa Mallory. 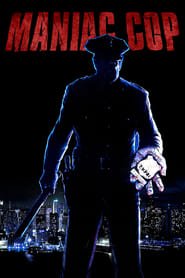