Tagline: You won't believe what goes on and what comes off in... Private School

Plot: Private-school student Christine loves Jim. But her classmate, Jordan, is also vying for Jim's attention and trying to end his relationship with Christine. Meanwhile, Jim's friend Bubba embarks on a series of sexual escapades, including dressing up as a woman to access the girls' locker room. Despite Jim and Christine's efforts to spend some time alone, various shenanigans and schemes interfere. 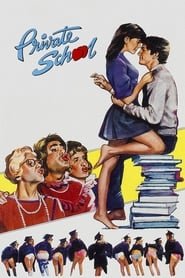