Tagline: MURDER! The blind guy couldn't see it. The deaf guy couldn't hear it. Now they're both wanted for it.

Plot: A murder takes place in the shop of David Lyons, a deaf man who fails to hear the gunshot being fired. Outside, blind man Wally Karue hears the shot but cannot see the perpetrator. Both are arrested, but escape to form an unlikely partnership. Being chased by both the law AND the original killers, can the pair work together to outwit them all? 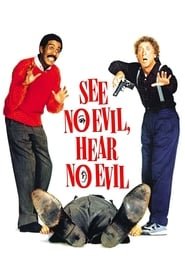 Desperately Seeking Susan (1985)
Tagline: Roberta is desperate to be Susan. Susan is wanted by the mob. The mob finds Roberta instead...
Genre: Comedy, Drama
Runtime: 104
Release: 1985-03-29