Tagline: When U. S. Bates told his son he could have any present he wanted, he picked the most outrageous gift of all... Jack Brown.

Plot: On one of his bratty son Eric's annual visits, the plutocrat U.S. Bates takes him to his department store and offers him anything in it as a gift. Eric chooses a black janitor who has made him laugh with his antics. At first the man suffers many indignities as Eric's "toy", but gradually teaches the lonely boy what it is like to have and to be a friend. 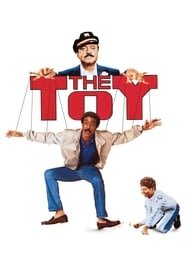