Tagline: Owen asked his friend, Larry, for a small favor...

Plot: Larry Donner, an author with a cruel ex-wife, teaches a writing workshop in which one of his students, Owen, is fed up with his domineering mother. When Owen watches a Hitchcock classic that seems to mirror his own life, he decides to put the movie's plot into action and offers to kill Larry's ex-wife, if Larry promises to murder his mom. Before Larry gets a chance to react to the plan, it seems that Owen has already set things in motion. 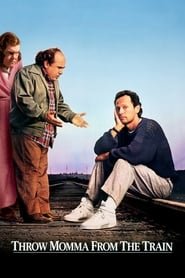